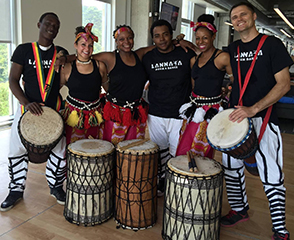 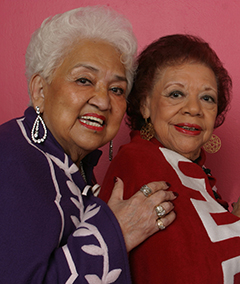 Las Tesoros de San Antonio currently includes Blanca Rodriguez, 'Blanquita Rosa,' and Beatriz Llamas, 'La Paloma del Norte,' two singers who each enjoyed widely popular recording careers in the 1940s, 50s, and 60s throughout the US, Mexico, and beyond. Now in their 80s, these musical icons have returned to the stage, inspiring audiences to celebrate and reclaim the rich cultural traditions of San Antonio and south Texas. Las Tesoros perform a variety of musical styles in Spanish and English including rancheras, mÃºsica norteÃ±a, boleros, corridos, and more. Each singer, with her own personal story and style, contributes to this unique ensemble representing the soul of Texas/Mexico border music. Touring performances may feature one or both members of Las Tesoros, and are accompanied by trio or mariachi. Screenings of the feature-length documentary, Las Tesoros de San Antonio: A Westside Story, are available, as well as interactive bilingual presentations and Q&A sessions. Las Tesoros were honored to receive a National Heritage Fellowship in 2019 and have received many other awards and honors. Unfortunately, former members Janet Cortez 'La Perla Tapatia' and Rita Vidaurri 'La Calandria' passed away in 2014 and 2019, respectively. Photo by Antonia Padilla. 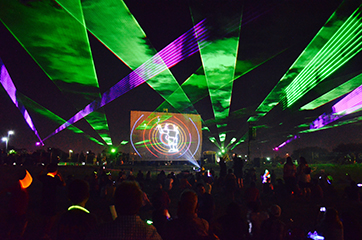 Laser Spectacles, Inc. uses laser light to create art and entertainment for events. Tim Walsh, the president of Laser Spectacles, is called 'The Memory Weaver' for his ability to transform a venue with lasers and music into an experience that attendees will remember forever. The company energizes fairs or festivals with dancing laser beams and mesmerizing laser graphics, brings historical buildings to life using exciting 'laser mapping' techniques, and provides interactive experiences for attendees. Venues include fairs, festivals, rodeos, churches, meetings, libraries, sporting events, anywhere large groups of people are gathered. Lasers bring a sense of excitement to an event, and provide an alternative to fireworks for a 'grand finale.' And lasers can communicate! Using logo projection and laser text projection, attendees can see sponsor logos and even learn about the theme and history of the event, all presented as part of an entertaining light show. Company president Tim Walsh is an accomplished composer and performer and has applied his talent to create laser art in unusual ways that have won many awards over the last 30 years. Photo by Jake Splawn. 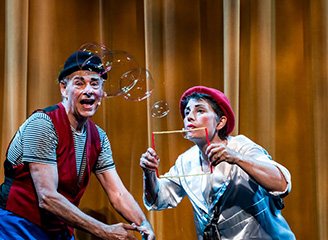 The Laughter League produces hundreds of shows annually throughout Texas and beyond. School assembly programs: Science of the Circus utilizes skills seen at the circus such as juggling, balancing and dance to teach laws of motion, simple machines and other science concepts; Count on Comedy Math Show shows audiences how math is everywhere; and The Magic Storybook introduces children to the elements of stories, such as characters, settings, costumes, music, and structure. Libraries book the summer reading show year after year, which aims to excite young children about reading and learning to use their imagination. All school and library shows are presented by a team of gifted physical actors who utilize comedy as a tool for inspiring laughter and engaging their audience. Laughter League presents large scale theatrical presentations, which take audiences on a journey through the Golden Age of Comedy by combining the dazzling excitement of Cirque du Soleil with the madcap mirth of Saturday Night Live, featuring a talented ensemble of musicians, comedians, and cirque artists. They create memorable shows filled with stunning feats of daring and purely magical moments that have been performed around the world, from China to the Middle East and even Paris, Texas. Photo by Lennie Duensing. 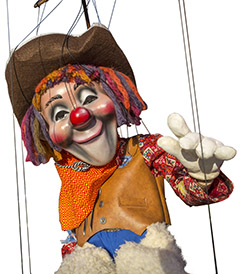 Le Theatre de Marionetteâs repertoire of storybook classics and variety shows has delighted audiences across Texas since 1985. Known for its theaters operating from 1990-2004 in Dallas, Fort Worth, and Arlington, Le Theatreâs Dallas-Fort Worth-based touring company performs in a multitude of small and large venues from schools, libraries, and museums to malls, civic centers, performance halls, and festivals. Featuring one-of-a-kind marionette puppets, designed and built by a team of local artists, Le Theatreâs performances are family-friendly, kid-tested and teacher-approved. Educational, interactive puppetry classes and marionette-making workshops are popular add-ons to round out the Le Theatre experience. LTDM performs in two styles: bridge (long-strung) and cabaret (short-strung). Bridge titles include 'The Little Mermaid,' 'Jack and the Beanstalk,' 'Cinderella,' 'Snow White,' and 'Wizard of Oz.' With 40-50 minute running times, these presentations are perfect for booking field trips into a 150-500 seat venue and can be combined with hands-on, interactive workshops sensitively designed to instruct in puppet operation and/or construction. Cabaret titles include 'Silly Strings' variety show, 'Out of This World' sci-fi variety show, 'Happily Ever After' the princess-palooza hit, as well as 'Hansel and Gretel,' a storybook favorite with schools and child care centers. Photo by John Hopkins. 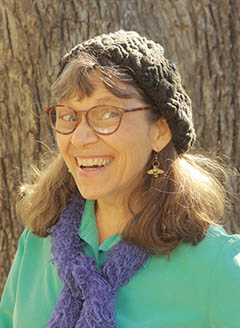 Kim Lehman is a storyteller, musician, workshop presenter, honey bee educator, and author. For over 30 years, she has performed at hundreds of festivals, schools, libraries, and museums, including being a featured teller at the Texas Storytelling Festival. Each entertaining and educational program includes a variety of stories and songs that can be tailored to each audience and venue. Kim is a well-known educator best known for her dynamic, practical workshops featuring easy-to-implement activities for librarians, teachers, and parents. She has presented over 160 workshops throughout Texas. Some popular topics include using music, storytelling, puppets, art, science, and literature with children. The Story and Song programs combine songs, stories, props, poetry, puppets, and participation for preschool, elementary ages, and families. Possible themes include folktales around the world, pioneers, fairy tales, space, and more. All Together Now is an inter-generational program, bringing together children and senior citizens. Science programs range from Aerodynamics to The Buzz About Bees, a program about honey bees with participation, music, props, and optional hands-on activities. Known as the Bee Lady, Kim is the author of Beekeeperâs Lab: 52 Family-Friendly Activities and Experiments Exploring the Life of the Hive. Photo by Mark Wieland. 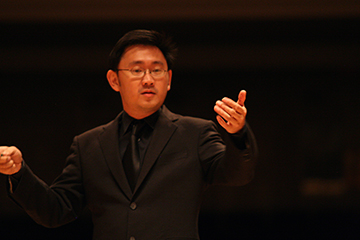 1st Prize Winner of the 2017 American Prize Conducting Competition, Jason Lim has guest-conducted around the globe including the Academic State Symphony Orchestra of Ukraine, the Zabrze Philharmonic Orchestra, and the Malaysian Philharmonic Orchestra. Jason has appeared as guest conductor with the Johnstown Symphony Orchestra, the Abilene Philharmonic Orchestra, Denton Bach Society, and has conducted the American Baroque Orchestra. Jason has also dedicated his talents with youth orchestras and has worked for several youth summer festivals in Asia and the United States. Jason has conducted the McKinney Philharmonic Orchestra, the Greater North Texas Youth Orchestra, and has been the program and artistic director of the Summer Music Intensives. Jason served as artistic director and conductor of the Odysseus Chamber Orchestra and the NOVA ensemble. Jason has received the Ernst Bacon Memorial Award and was the 1st Prize Winner of the New South Wales Ministry of Arts Conducting Prize in Sydney, Australia. Jason is available to guest conduct orchestras of all levels including All-State and Region orchestras. Photo by Ron Bergman. 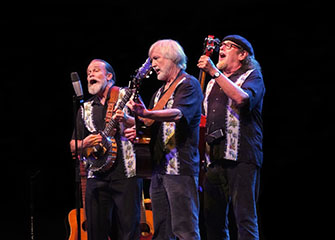 When music fans remember â60s folk music, they remember the iconic songs of the Limeliters. After six decades and 25+ albums â including three top 10 â the trio still brings American folk classics into the modern age, with high energy, thrilling three-part harmonies, and zany humor. Since 2018, the band has been based in Texas. Award-winning singer-songwriters Andy Corwin, Steve Brooks, and Daniel Boling carry on the signature vocal sound of founders Lou Gottlieb, Alex Hassilev, and Glenn Yarbrough. Their concert programs transport baby boomers of all ages into a musical time machine, as they mix historical songs like 'Thereâs a Meetinâ Here Tonight,' 'John Henry' and 'Wabash Cannonball' with â60s standards like 'If I Had a Hammer' and 'Those Were the Days.' They include 'Take My True Love by the Hand,' which racked up more than 1 million YouTube views after appearing in the TV hit 'Breaking Bad.' Todayâs Limes tour coast-to-coast, and increasingly around Texas, including halls like the Brauntex and the Point Theatre and four appearances at the Kerrville Folk Festival. As Time Magazine puts it, 'If the Kingston Trio are the undergraduates of big-time folk singing, the Limeliters are the faculty.' Photo by Love Imagery. 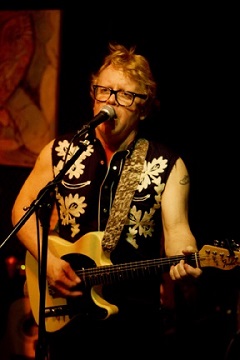 Ken Little, 2014 Texas State Visual Artist - 3-D, is a visual artist and a musician. Since 1988, he has maintained an art studio in San Antonio. He has exhibited his work in sculpture, nationally, and internationally. He has received many awards and honors, including his current designation as the 2014 Texas State 3 Dimensional Artist of the year. 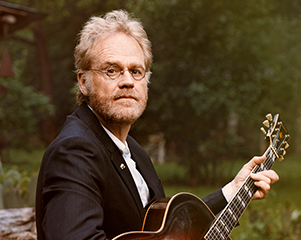 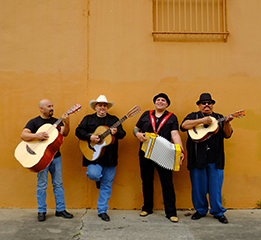 Max Baca and Los Texmaniacs are the past, present, and future of conjunto music. Combine a hefty helping of Tex Mex conjunto, simmer with several parts Texas rock, add a daring dash of well-cured blues and R&B riffs, and youâve cooked up the tasty GRAMMY-winning Los Texmaniacs groove. Max Baca is a legend on the bajo sexto, and Josh Baca is fast attaining legendary status on the accordion; with those two instruments, they create the core of the lively conjunto sound. Los Texmaniacs are the new worldwide kings of Texas roots music, feeding the masses with only the best in musical fare, cooked up from wide-ranging experience in touring and recording. While Max Baca has participated in eleven GRAMMY Award-winning projects, the band's first Smithsonian Folkways recording in 2010 won a GRAMMY. This was followed up with a nomination for their 2019 album, Borders y Bailes. Whether playing an intimate house concert as an acoustic trio or rocking stage/theater/street dances, the band always entertains and educates. This music is not a dusty museum relic, but a vital heartbeat for a group of musicians who truly have one foot on either side of the border and live a daily code-switching identity. Photo by Michael Stewart. 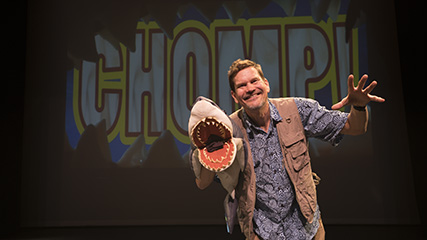 Want to get your students excited about science? STEM and the arts go hand-in-hand in multimedia presentations by author, YouTuber, and 'singing zoologist,' Lucas Miller! Pre-K to 5th graders will laugh, sing and learn about wetlands, ocelots, monarch butterflies, metamorphosis, and much more through Lucas' creative blend of smart songwriting, hilarious puppetry, and dazzling animations. Perfect for elementary schools, libraries, and family concerts: kids love Miller's zany, unbridled enthusiasm, and adults love his focus on accurate, curriculum-related science. Each 45-55 minute presentation features several songs and stories that address a major science theme such as life cycles, adaptations, Texas ecosystems, and ocean ecology. Creative animations, videos, and images accompany the music and lessons to deepen understanding and keep the audience focused. Lucas earned a degree in zoology and has been touring Texas and the nation since 1994. He knows his biology and how to introduce kids to science in a way that leaves them excited and motivated. Look him up on YouTube to sample his work and then visit www.singingzoologist.com for all the details on bringing him to your school, library, theater, or other venues. Photo by Thomas Slanker.