Pat Hazell is Chief Creative Officer of Sweetwood Creative in Austin. Showtime declared Hazell one of the five funniest people in America. His 30 years of experience as a writer, producer, and director have made him a go-to guy for new American theater. Hazell is one of the original writers for NBC's 'Seinfeld,' a veteran of 'The Tonight Show,' contributor to NPR, and a critically acclaimed playwright. Hazellâs signature work, 'The Wonder Bread Years,' is a fresh and funny salute to Americana. The fast-paced one-man show, starring Hazell, hilariously illustrates our collective consciousness. The production not only restores a much-needed sense of wonder but leaves audiences laughing and savoring the past like never before. 'The Wonder Bread Years' is a comic bullseye for Baby Boomers everywhere, and has been hailed by Jerry Seinfeld as 'Milk-snorting funny!' Premiering in 2019, Hazellâs newest one-man show 'Pat Hazellâs Permanent Record' is a confessional night of humor, heart, and humanity where Hazell opens the vault to all his faults to turn a stroll down Memory Lane into a high-speed chase down Memory Highway. Culture Buzz hails the production as 'A solo performance masterpiece.' Additionally, Hazell offers workshops and master classes for all ages. Photos by Andy Snow & Brent Isen. 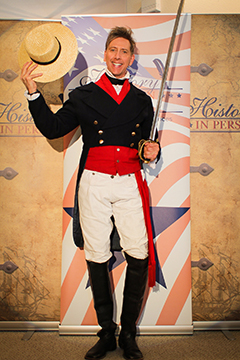 Recipient of the 2008 Texas Council for the Social Studies 'Friend of Social Studies Education' award and keynote presenter for the 2014 Texas Social Studies Supervisor's Association state conference, Bill Perryman is known throughout Texas for his work in the field of history and social studies education. An award-winning teacher, Mr. Perryman holds a master's degree in education from Texas State University and an administrator/mid-management certification from the University of Texas-San Antonio; he has conducted graduate studies coursework in historical research through the University of Virginia. History In Person Theater features historical portrayals of pivotal characters in Texas and American history augmented by music, sound effects, and visual images to create a multi-sensory experience for each audience. Program repertoire includes Adventure on the Underground Railroad - The Stories of Frederick Douglass and Harriet Tubman, Benjamin Franklin - An American Sensation, Sam Houston - Portrait of Honor, Thomas Jefferson - Independency 1776, Meriwether Lewis - Expedition Extraordinaire, Abraham Lincoln - Conscience of a Nation, Paul Revere - An American Patriot, George Washington - A Call to Duty, and William B. Travis - The Alamo - 1836! Photo by Lindsey Kaye Perryman, MPh.