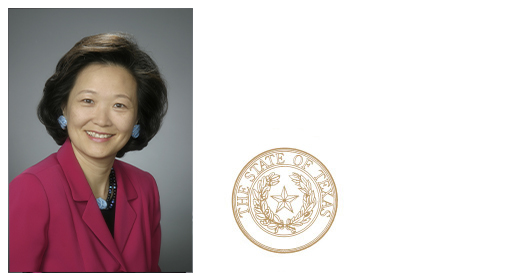 Theresa W. Chang is an attorney and special commissioner of the eminent domain administrative hearing in Houston.  Governor Abbott recently appointed Theresa to serve on the Texas Commission on the Arts in September 2019.  She previously served as the Judge of Harris County Civil Court.  In 2017, Theresa was rated the top judge of Harris County Civil Courts by Houston Bar Association in its judicial poll.

Commissioner Chang has tried hundreds of bench and jury trials during her legal career.  She served on the Commission for Lawyer Discipline of State Bar of Texas, as well as the Board of Directors of both State Bar of Texas and Asian American Bar Association.

Theresa obtained her Master of Science degree in Chemical Engineering from the Texas A&M University System and was a registered Professional Engineer prior to earning her law degree from the South Texas College of Law.  She will be inducted to Hall of Fame of College of Engineering at Texas A&M Kingsville in October 2019.

Theresa was appointed to the Board of Regents of University of Houston by then Governor George W. Bush in 1997, and has served as President of various community organizations, such as Texas Executive Women and Asian Chamber of Commerce.

Currently, Theresa is a member of the Board of Directors of the South Texas College of Law, the Chinese Community Center, and the Board of Trustees of Houston Grand Opera.  She has served on the Board of many other organizations, such as YMCA, American Leadership Forum, Strake Foundation, Houston Area Urban League and Texas Governor’s Commission for Women.

Because of Commissioner Chang’s professionalism and community involvements, she has been honored as 2020 Women of Distinction by ABC Channel 13; with the George Bush Award from the Asian Pacific American Heritage Association in 2016; Impact Award from the Asian American Bar Association in 2012; Distinguished Alumni from the Texas A&M Kingsville in 2011; 50 Most Influential Women in Houston by Women Magazine in 2010; and Women on the Move by Texas Executive Women in 2005.

Theresa and Dr. Peter Chang have been married for 36 years and are proud parents of Winston and Spencer.  They believe deeply in giving back to the community through serving as gala chairs or honorary chairs of many charitable organizations.  Most recently, they served as honorary chairs of Asia Society’s Tiger Ball and Hope Clinic Gala in 2018.  In 2019, they were honored with the John Connor Humanitarian Award from Operation Smile and the Top 20 Power Couple Impact Maker Award from CKW LUXE.